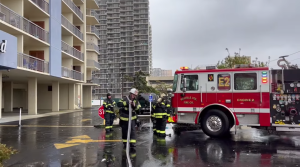 In one case, residents at the Highpoint North Condominiums were evacuated after a fire was reported on the 7th floor. OCFD says initial reports indicated that a transformer inside the building went up in flames. Once the scene was under control, firefighters helped residents gather their essential belongings from their units. No injuries were reported.