SLAUGHTER BEACH, Del. – Tuesday, congressmembers joined local leaders to observe erosion and the effects of climate change on Delaware’s coastline. “Senator Carper and I are co-leads on a bill called the SHORRE Act, which is really about making sure that the Army Corps of Engineers has a fourth new mission: to protect and restore our shorelines and riverbanks,” said U.S. Representative Lisa Blunt Rochester.

The SHORRE Act, or Shoreline Health Oversight, Restoration, Resilience, and Enhancement Act, is expected to help restore riverbanks and coastlines across the nation. Lawmakers say it would also help to make coastal communities more resilient to the effects of climate change. That includes rising sea levels, extreme weather, flooding, and erosion.

“It’s really about making sure that the Army Corps of Engineers has a fourth new mission: to protect and restore our shorelines and riverbanks,” said Rep. Blunt Rochester. 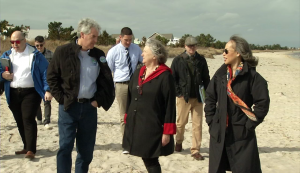 The lawmakers say they will take what they’ve learned back to the nation’s capital, in hopes of passing the SHORRE Act. “What we hope to bring is information and data. But we also will hear from other states like Louisiana, which is similar to us and is impacted by climate in a major way,” said Rep. Blunt Rochester.

DNREC Secretary Shawn Garvin says this action is sorely needed in Delaware’s smaller bay communities. “The pressing need is climate change. We’re seeing the impacts. Delaware is the lowest lying state in the nation. You come to a community like Slaughter Beach, and you’re seeing it on a daily basis,” he said.

If you ask local leaders, they will tell you that the horseshoe crab is a prime example of just how important it is to protect fragile, coastal ecosystems. Each year, red knots make a remarkable migratory journey from the central Canadian Arctic to the southern tip of South America. When the red knots stop in Slaughter Beach, they feast on the horseshoe crabs that live there in protection.

A horseshoe crab shell sits in the sand at Slaughter Beach.

Garvin says restorative measures, like those in the SHORRE Act, would be an important line of defense against further deterioration. “The more shoreline you have, the more places the horseshoe crabs can go to mate, and really also to provide food for the red knots,” said Garvin. “We can’t beat Mother Nature if we don’t work with Mother Nature. So, part of this is the resiliency side of it. But, we really also need to focus on mitigating side to try to at least create a dynamic where we’re seeing less pressure in places like Slaughter Beach.”

Sen. Carper and Rep. Blunt Rochester also paid a visit to Rehoboth Beach Tuesday afternoon. They spoke with local leaders about how money from the federal Infrastructure Investment and Jobs Act will be used in Sussex County. About $43 million from the legislation is slated to help finish and repair the Indian River Inlet.

Sen. Carper says, just like in Slaughter Beach, those improvements are badly needed. “The movement of the water over the years undermined the bridge, and we had to build another bridge that goes all the way over the Indian River Inlet,” he said. “But, Mother Nature has a way of scouring and taking out even more of the land on either side of the Indian River Inlet.”

Not only is this funding important for protecting the environment. Sen. Carper says it will also keep Delaware a top destination for tourists and their dollars. “Folks come to Delaware and they want to go to the beaches, they want to go swim and fish or go surfing. But, there’s a ton of people who come just because of nature,” he said.

Wednesday, Sen. Carper and Rep. Blunt Rochester will lead a field hearing with federal, state, and local officials. The hearing is titled “Examining Shoreline and Riverbank Restoration in the face of Climate Change”, and will be held at Bethany Beach Town Hall. A live stream of the hearing will be available here.