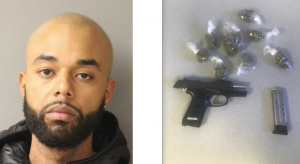 SEAFORD, Del. – Seaford Police have made arrest in connection to a shooting that happened earlier this month. 36-year-old Eric A. Jackson of Bridgeville is now facing charges in connection to the incident.

On February 11th, police say two suspects opened fire on each other in the parking lot of Meadowbridge Apartment complex. Surrounding homes and structures were damaged by the gunfire. No one was hurt.

Police were able to identify Jackson as a suspect, and obtained an arrest warrant for him on February 18th. The next day, officers saw Jackson leaving the apartment complex. He was pulled over and arrested. A search of his vehicle yielded eight bags of marijuana, weighing 46 grams in total. Police also found a loaded 9mm handgun in his jacket pocket.

Jackson was taken to the Department of Corrections in lieu of a $101,000 cash bond for the shooting, and $100,000 cash bond for the traffic stop.
Categories: Crime, Delaware, Local News
Tags: crime, delaware, eric a. jackson, meadowbridge apartments, seaford, seaford police department, shooting