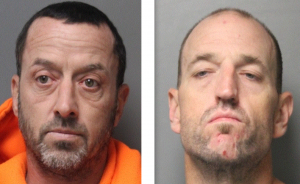 On Friday, Delaware State Police wrapped up a several-week long robbery investigation, after searching a home on the 36000 block of Blackstone Drive in Ocean View, Del. Police say on December 26th, 2021, troopers responded to Shore Stop in the area of Lighthouse Road and Zion Church Road for a robbery.

Investigators say a male suspect got out of the passenger side of a vehicle before entering the store and robbing the clerk at gunpoint. The suspect left Shore Stop with cash and got back into the waiting vehicle. The clerk was not hurt in the robbery.

42-year-old Lucas S. Powell of Millville and 47-year-old Leck Lyons of Ocean View were identified as possible suspects. Evidence believed to be connected to the robbery was found in their home. Police also found 3.3 grams of a counterfeit substance disguised as cocaine, and drug paraphernalia.

Meanwhile, Lyons was charged with first degree robbery, second degree conspiracy, possession of marijuana, and multiple traffic violations. He was arraigned at Justice of the Peace Court #2, and taken to Sussex Correctional Institution on $62,000 cash bond.

The 38-year-old woman was arraigned in the Justice of the Peace Court #2 for her capias, and released on her own recognizance.