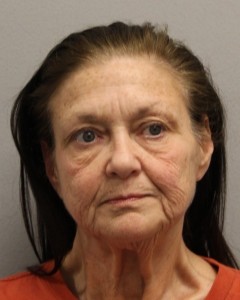 MILTON, Del. – A Harrington woman is facing multiple charges after being involved in a crash early Saturday morning. 59-year-old Sandra L. Baker is now facing a 6th offense DUI and multiple other charges.

Police say around 4:15 a.m. Saturday, troopers were called to the area of Coastal Highway (SR-1) and Broadkill Road (SR-16) for a report of a crash. Witnesses told police that a white Volkswagen Jetta went off the road and hit a road sign. After the impact, police say the vehicle continued northbound.

When troopers arrived, they found the vehicle parked at the Valero gas station on Deep Branch Road. Police say the vehicle had damage to the side of the car and a shredded rear tire. Troopers made contact with Baker, who was still in the driver’s seat. Police say an odor of alcohol was detected, and troopers began a DUI investigation.

A computer search revealed that Baker’s driver’s license was suspended after she had been arrested for five prior DUI offenses. Baker was arrested and taken to Troop 7. She was charged with a 6th offense of felony DUI, leaving the scene of a property collision accident, and driving with a suspended license. Baker is also facing charges for failure to have insurance identification in her possession, and failure to report a collision.

Baker was arraigned at Justice of the Peace Court 3 and taken to Delores J. Baylor Women’s Correctional Institution on $10,310 secured bond.