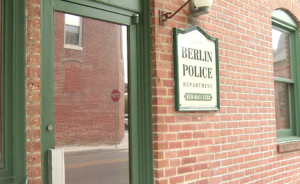 BERLIN, Md. – Berlin Police are investigating a motor vehicle theft. Police say around 3:00 a.m. Sunday, an officer was looking into an undetermined noise in the are of Tripoli and Church Street. Police say when the officer arrived, he saw a vehicle doing donuts in the travel portion of the roadway with a damaged rear tire. The officer tried to conduct a traffic stop, but the vehicle sped away, running multiple stop signs.

Later in the day, around 10:50 a.m., Maryland State Police began investigating property damaged by a vehicle at a home on Worcester Highway (US Route 113). Troopers say the same 16-year-old had damaged two separate fields, bushes and other landscaping, and a utility box.

The 16-year-old is now facing multiple charges, including motor vehicle theft, driving while intoxicated, reckless and negligent driving, and driving without a license. He is also being charged with fleeing and eluding, driving wrong way in a one way, leaving the scene of a property damage accident, and rogue and vagabond. The Department of Juvenile Justice ordered the 16-year-old to be released to a parent.