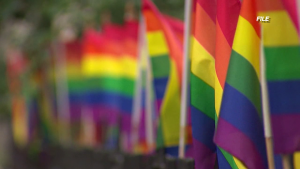 DELMARVA.-  “So I realized through internet friends when I was 14 that non-binary people existed. It wasn’t something I was aware of up to that point,” said Harbaugh.

Julian identifies as non-binary, and uses the pronouns they and them. This is a point Julian says took years to get to, while on a journey of self discovery. “I still had a lot of messages about this is what feminine and female people should look like. This is what is attractive to people. This is what allows you to be accepted,” said Harbaugh.

This week marks Non-Binary Awareness Week, aiming to shine light on those who identify as non-binary and celebrate the diversity of the community.

I’m told that non-binary is actually an umbrella term, as many genders exist outside the gender binary including bigender, genderfluid, and agender, which is what Julian identifies as. “But there are people who are non-binary who are very feminine or very masculine. There’s so many different ways to express being non-binary because it’s so many different things for every single person,” said Harbaugh.

Advocates say, discrimination is one of many challenges non-binary individuals face. “Unfortunately, that doesn’t give that person you’re assessing a chance to show who they really are and a lot of times it means the individual who’s doing that can actually be missing the opportunity to make a great new friend,” Found of Mid-Shore TRANSliance’s Tina Jones.

I’m told, this is another reason why groups like Mid-shore TRANSliance should be in the community to not only tell, but help normalize their stories. “Its also important for folks who identify as non-binary to have a place where they can feel safe, where can go and talk to other people like themselves and to learn and to share information,” said Jones.

Julian is also Camp Rehoboth’s Youth Peer Leader, and says they love working with youth and hopes to inspire them to live in their truth as well.  “Most of us want to talk about it because most of us have had a journey with coming to terms with being non-binary. We look like everyone,” said Harbaugh.

Moving forward, Julian says the best advice for those who have questions is to simple just ask them. “Then we create a world in which other people can realize that for themselves and live in a authentic and comfortable way,” said Harbaugh.

Advocates also say that in Delaware they’re pushing to add an X category as a gender marker for government issued documents like I.D.’s and Driver’s Licenses.