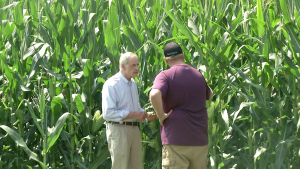 LAUREL, Del. – A local farmer’s push to create healthy soil grabbed the attention from not only conservationist groups, but state senators as well. “Something is going on here and we can just ring our hands and say God that’s too bad or we can do something about it,” says U.S. Senator, Tom Carper.

When you change the soil, you change the world; a motto farmer Blaine Hitchens lives by, as he strives to combat climate change. The efforts from farmers like Hitchens in partnership with the Natural Resource Conservation Service (NRCS) caught the attention of senators. “How do we create an economic model that provides more farm income and also encourages farmers at the same time to do things better, smarter, and with respect to their soil,” says Sen. Carper.

We’re told the Growing Climate Solutions Act will allow farmers to generate income by selling carbon credits they earn through conservation practices. Through conservation efforts such as irrigation water management, pest management, and waste treatment, it’s said to help absorb excess nutrients, prevent run-off and soil erosion. “If people are willing to trust in what I’m telling them and helping them achieve different goals and changing a little bit of their farming practices, it’s a big commitment,” says Hitchens.

With his soil practices, we’re told Hitchens was awarded the 2021 Governor’s conservation award for Cooperator of the Year. Which officials say, his work to preserve soil is commendable. “So he’s able to help us now take that and focus it into all of our producers whether you’re urban, suburban, whether you’re traditional, whether you’re socially disadvantaged, beginning farmers or beyond,” says Kasey Taylor, a state conservationist with NRCS.

Those with NRCS say, they’re also dedicated to getting farmers the money needed to continue the efforts and teach others how to do the same. “We really want to make sure that it’s now complimentary, and will really take them into that sustainability so now we have the integrity of conservation for generations and decades to come,” says Taylor.

Hitchens also tells 47 ABC, he hopes to continue and share his efforts to emphasize the best crop he can, “And if this is what actually ends up changing the climate, that means we’re the inventors of it, the innovators of changing the way the climate works.”

Those with NRCS say they hope to implement these farming practices all across the state of Delaware. As well as provide knowledge, technology, keep farmers farming, and help alleviate climate change.

The Growing Climate Solutions Act of 2021 passed the senate back in late June and is currently held at the desk in the House waiting for the next reading.