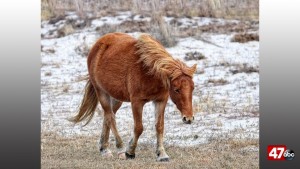 Officials say they believe her injuries were due to a hit-and-run automobile accident the previous week. Both the mare and her foal (N2BHS-CKPT) were likely involved in a low-speed motor vehicle accident last week along Bayberry Drive. N2BHS-CKPT is still lame but has improved noticeably over the past week and continues to move around with her band.

We’re told the foal will remain in the wild, but park staff will continue to monitor her condition in the weeks ahead.

Park officials are reminding visitors to slow down and always drive with caution along Assateague’s roadways. They add that visitors should be on the lookout for horses and other wildlife when visiting the National Seashore. Any road accident within the park, especially those involving wildlife, should be reported to law enforcement rangers at the Visitor Center.