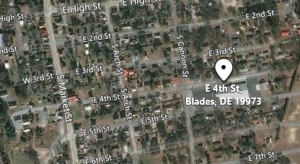 BLADES, Del. – Delaware State Police are investigating a homicide. Police say on Saturday, June 19th, troopers were called to the area of East 4th Street in Blades for a shots fired complaint. When troopers arrived, they found a 20-year-old man lying on the side of the road with a gunshot wound. The victim was taken to an area hospital, where he was pronounced dead. His identity has not been released as police work to notify next of kin.

Police say the case is being handled by the Delaware State Police Homicide Unit. They’re asking anyone with information to contact Detective M. Ryde by calling (302) 741-2730. You can also submit tips to Delaware Crime Stoppers at (800) TIP-3333, or at www.Delaware.CrimeStoppersWeb.com.