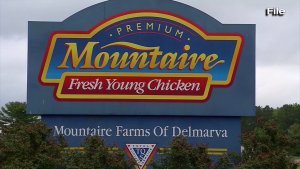 SELBYVILLE, Del. – After the dismissal of a Mountaire farm’s employee’s federal charge against the United Food and Commercial Workers Local 27 Union, Oscar Cruz Sosa is now challenging the National Labor Relations Board, and he’s charging them with illegal surveillance.

According to Mountaire officials, Cruz Sosa attempted to overthrow the union by gathering over 800 signatures. However, the case was dismissed because there was a contract bar which prevents any election for up to three years.

We’re told, the NLRB asked Mountaire for surveillance footage during the time Cruz Sosa was gathering votes to overthrow the union. Although Mountaire refused to hand over surveillance information, Cruz Sosa’s lawyer says, they believe this was an unfair attempt to intimidate Cruz Sosa and his coworkers and they say they want justice. “This sort of surveillance is on a union opponent has got to be illegal and has to be stopped and we’re going to continue to fight for him all the way,” says Glenn Taubman, an attorney with the National Right to Work. “We’re going to explore every legal avenue that we can to hold the union accountable for this sort of demand of personal information.”

Now the NLRB have yet to comment on the appeal, but as the appeal moves forward we will keep you updated as to the status of the case.