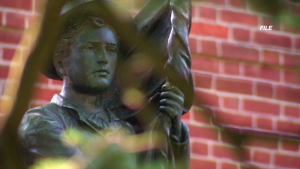 EASTON, Md.- Some groups are now filing a lawsuit demanding the Talbot Boys monument be removed.

The groups which include the Talbot County Branch of the NAACP are filing suit in federal district court.

They said they are asking the court to rule that the statue is glorifying the confederacy at the courthouse and is both unconstitutional and illegal under federal law and the laws of the state.

The move for a lawsuit marks the latest chapter in efforts to get the monument removed, which some say promotes a legacy of racism and is a symbol of white supremacy.

Most recently the county council voted to keep the statue where it is.

“The council left us with no other choice but to take this action, we have waited long enough in the words of Fannie Lou Hamer, we are tired of being sick and tired, the time for removing the confederate monument known as the Talbot Boys is now,” Richard Potter, President of the Talbot County NAACP, said.

We are told that the lawsuit claims that the statue can’t remain on government property because it’s not consistent with the core promise of the 14th Amendment, equality to all Americans under the law.