The Bright Side: Saving San Domingo 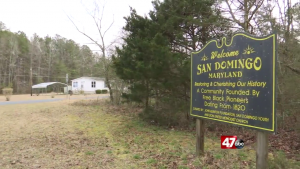 WICOMICO CO., Md. – Tucked away in Wicomico County is a small community called San Domingo. While the community is hundreds of years old – the history remains largely unknown. But now, one Salisbury University professor is digging in to that history and trying to preserve this community.

“I would’ve told you that I knew every place within biking and driving distance, I got around a lot as a teenager,” Professor Tom Horton said. “I mean I knew Mardela, I knew Sharptown.”

Then sometime around 2003 while on his bike, Tom found a place that caught him a bit off guard.

San Domingo, a small community tucked away in Wicomico County, founded in 1820 by freed slaves. But other than knowing the general time that the area was founded and who was behind it, not much is known about this tiny place.

“No one knows, there are no historical documents to show where did those people come from, how long were they free,” Tom said.

Tom has a history of filmmaking, often highlighting other areas here on the shore, including Smith Island. So when he came across San Domingo, he started working on a documentary about the history of the area and the few people who live there today, called Saving San Domingo. That’s when Tom says he realized, historically, the town probably wanted to stay hidden.

“I suspect for a lot of it’s 200 year old history, it was in San Domingo, or Santo Domingo, it might’ve been in their interest to keep a low profile,” he said.

He says that could partly be because reverse underground railroads ran right by that area, taking freed slaves back to slave owners in the south. But while he dug into the limited history he could find, Tom says he also wanted to use the documentary to shine a light on what the community has to offer today.

“I think what would catch your eye is the school, built around 1914, something like that, the Rosenwald School,” Tom said.

And that, after watching the short film, people will find themselves taking a trip to the tiny community.

“I hope they go ride through San Domingo, take a look at it,” he said.