The National Oceanic and Atmospheric Administration’s (NOAA) Climate Prediction Center is now using data from the 1991-2020 Atlantic hurricane seasons to determine what is average for the Atlantic Basin. Prior to this year, they were using data from 1981-2010. Based on the data from those years, on average there were 12 named storms, 6 hurricanes and 3 major (Category 3 or above) hurricanes.

NOAA’s researchers have attributed the increase in averages to multiple factors. One explanation involves the improvement in observing platforms, like NOAA’s fleet of next generation environmental satellites. And there are other factors brought on by climate change, like the warming ocean and atmosphere. NOAA’s researchers have decided that climate change can influence storm intensity, but they need to conduct more research on this topic for more conclusive results. 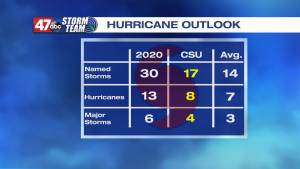