St. Patrick’s Day has had some interesting weather in previous years. In 1931, Salisbury received 4 inches of snow! And in 1945, there was a record high temperature of 87 degrees. While the 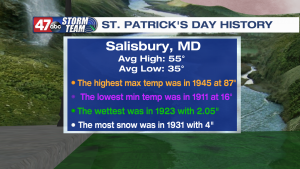 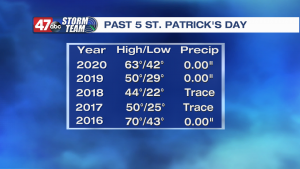 Earlier I had mentioned that the most snowfall on record for St. Patrick’s Day was in 1931 at 4 inches. The most recent snow event on this holiday was in 2014 when 3.0 inches of snowfall was recorded. But, at the 7 AM observation, there was 4.o” of snow on the ground. This was also the coldest St. Patrick’s Day on record in terms of high temperatures at 32 degrees. On average, there is a 5% chance it will snow on St. Patrick’s Day.

Tomorrow, weak high pressure will build onto Delmarva causing us to have drier weather. Mostly cloudy skies can be expected with highs in the mid to upper 50s, which is a few degrees above average. 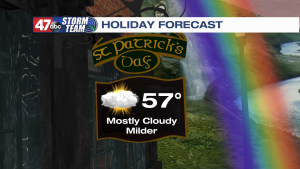