Why We See Frost

Thursday and Friday mornings there was frost on our windshields. But, these were the only days this week we had frost. How come on some days we see frost and others we do not? This blog will explore why frost forms, why it forms on our cars and how you can effectively defrost your car. 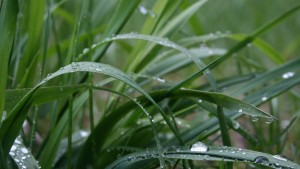 On summer mornings, you can see dew on your grass and on your car. Dew forms when the air temperature is the same as or below the dewpoint temperature, which is a measure of humidity. Due to soil moisture and radiative cooling at night under clear skies, dew forms. During the day, the sun heats Earth’s surface, but at night this radiation is emitted from the ground, which causes Earth’s surface to cool—this is radiative cooling. This cooling of the warm, moist soil causes condensation to occur and dew to form. But, dew forms when the air temperature is above freezing. 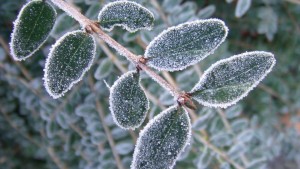 Frost forms at below freezing temperatures. Frost generally forms due to deposition, which is the phase change of water vapor directly into ice. This type of frost is called depositional frost and it normally appears in an ice crystal pattern. Another type of frost is frozen dew, which forms when liquid water freezes. When the dew forms, the air temperature and dewpoint are above freezing, but radiative cooling or a cold front moving through overnight could lower temperatures to be below freezing and the dew freezes. This type of frost looks slicker than depositional frost and it is harder to notice.

But, why do we see frost on our cars? Well, cars radiate heat more efficiently than soil, due to the materials they are made out of. This means that the temperature of the cars surface can quickly reach the point of saturation and form frost as long as temperatures are below freezing. 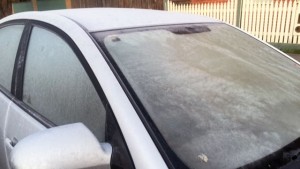 Overall, frost can delay your morning routine. In order to forecast if your car will have frost in the morning, ask yourself these two questions:

If you wake up and see frost on your car, here are a few tips to effectively defrost your car. First, you should turn your car on and turn on the defrost feature. Second, to ensure you do not scratch your windshield, use a plastic ice scraper or brush. Lastly, you can spray lukewarm or cold water on the windshield and wipe away the frost. Or use a sandwich bag filled with lukewarm or cold water and wipe the windshield with it. Do not use hot water as it will refreeze.

As always, tune into 47 ABC for your latest forecast.