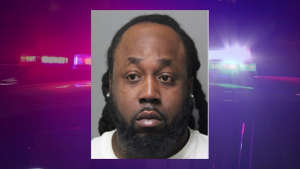 MILLSBORO, Del. – Delaware State Troopers say a traffic stop lead to the arrest of a man wanted on multiple warrants.

According to the police, around 1 p.m. on Friday, troopers recognized 32 year old, Darshon Adkins, as a passenger in a vehicle traveling on Hillcrest drive.
Troopers say they were familiar with Adkins from previous investigations, and his many active warrants for his arrest.

The 23 year old driver and Adkins were pulled over, and both taken into custody. During a search, troopers tell 47 abc, Adkins had 3.23 grams of marijuana, drug paraphernalia and .455 grams of heroin.

Adkins was taken to troop 4, where he was charged with multiple crimes including, possession of drug paraphernalia and marijuana, as well as manufacture with intent to deliver a controlled substance.