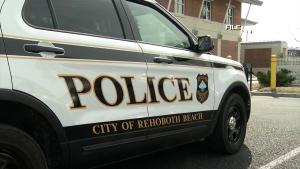 DELMARVA – Believe it or not police departments in beach towns across Delmarva are gearing up for the summer season, some of which double their force during that time of the year.

The pandemic has impacted almost every part of a police department’s seasonal hiring process: recruitment, training, an officer’s assigned duties and even how many positions a department can hire this year. However, both Rehoboth Beach and Ocean City tell us they feel a little more confident going into the summer of 2021 compared to 2020.

“We’re excited about this year. We’re probably a little more prepared than we were last year,” says Lt. William Sullivan with the Rehoboth Beach Police Department.

The Rehoboth Beach Police Department is preparing for the 2021 summer season and plans to hire 26 seasonal cadet positions. “As far as our training, now that we have been through one summer at least with some COVID restrictions, we will be able to incorporate that into training this year,” says Lt. Sullivan.

In previous years, Rehoboth has been authorized to hire as many as 30 seasonal cadets but Lt. Sullivan says an increase in pay and budget changes brought that number to 26 for this year.

Officials say COVID-19 caught almost everyone off guard last year and ended up impacting the things they were responsible for enforcing. “It was very difficult at times because people maybe had information they received a week before they came down and it had changed since then. We were constantly having to update those things with people and give information out and inform the public,” says Lt. Sullivan.

Police departments often work with their local health departments and are responsible for enforcing COVID regulations which often includes mask mandates and social distancing. The Rehoboth Beach Police Department says they handed out more than 25-thousand masks last summer, which were provided by DEMA. Lt. Sullivan says the department feels a little more confident this coming season now that both they and the public have a better understanding of health and safety measures.

Meanwhile, the Ocean City Police Department (OCPD) plans to take on 150 seasonal hires and they’ve turned to social media for recruitment since they haven’t been able to visit college campuses like usual. “Learning how to do things more with social media and videos, it’s given you a new look on things and you’re able to refresh your recruiting material and that’s definitely something we have been able to do,” says Ashley Miller, the Deputy Communications Manager for the Ocean City Police Department.

OCPD plans to increase community engagement for the upcoming summer with the hopes that it will help them better communicate rules and regulations. “Get engaged with our business owners more, get engaged with our restaurant staff because that way if we are out there and talking to them as these restrictions constantly change we’re able to provide quick better education to everybody in our community,” says Miller.

The Rehoboth Beach Police Department says the starting pay rate for a seasonal hire has gone up to $14.75 an hour and they are confident they will fill all 26 spots by March.

The Rehoboth Beach Police Department is accepting applications for seasonal cadets. The application deadline for the 2021 summer season is March 26. Applications submitted after the deadline will be retained for the 2022 summer season. Applicants must be able to attend the following mandatory training dates: April 16 – April 18, April 23 – April 25 and April 30 – May 2. Those applicants chosen for the bicycle patrol unit will be required to attend the following additional mandatory training dates: May 7 – May 9.

If you are interested in law enforcement, find out what qualifications you must meet and how to succeed by visiting www.cityofrehoboth.com/government/departments/police/careers for the employment application. For more information, you can contact Marion Jones at marion.jones@cj.state.de.us or 302-227-2577.