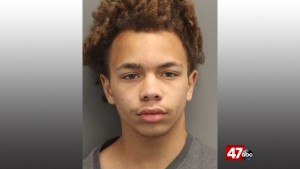 DOVER, Del. — Delaware State Police say a Gold Alert has been issued for a missing teen in Dover.

Police say 14-year-old Jorden Hunter was last seen entering a heavily wooded area on around 7 p.m., January 1st, after fleeing from the parking lot of Dover Behavioral Health. We’re told Hunter has a history of health related issues that could affect his safety if not properly monitored and treated.

Anyone with information on his whereabouts should call the Dover Police Department 302-736-7111.