For the past two mornings, Delmarva has had freezing fog, which is fog that freezes on some surfaces. But, on Delmarva, we experience a variety of fogs. In this blog post, we are going to explore five different types of fog.

Before we go into the types of fog, let’s discuss what fog is. The official definition for fog is “water droplets suspended in the air at earth’s surface,” according to NOAA. But, a simpler definition of fog is a type of cloud that touches the ground. Fog forms when water vapor condenses to form these water droplets at or near the surface. This process is similar to how clouds at higher altitudes form as well. The different types of fogs we will discuss in this blog are: Radiation Fog, Advection Fog, Freezing Fog, Evaporation Fog and Mountain/Valley Fog.

This type of fog is the one of  most common in the country, especially in the fall and winter. It forms because of radiative cooling, which occurs overnight under mostly clear skies as the air near the surface cools. Then, as the air continues to cool and it reaches saturation, which means that air has the maximum amount of water vapor it can hold at a specific temperature and air pressure, fog forms. As the surface continues to cool, fog will thicken. And as the air above this layer of fog cools, the fog will deepen. 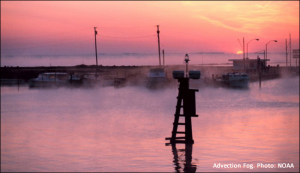 Advection fog is similar to radiation fog as it forms because of condensation. But, it does not occur due to radiative cooling. Instead, horizontal winds at the surface can cause advection fog to form. This condensation occurs because warm, moist air moves over a cold surface– like warm air moving over ice. As this warmer air moves over the cold surface, the air is cooled to saturation; thus, forming fog. Now, advection fog may look like radiation fog, but a few ways to tell the difference between the two are this fog can form under cloudy skies and strong winds. Also, advection fog moves horizontally as horizontal winds move it. 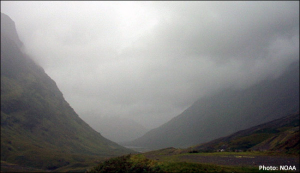 This is a type of radiation fog, but it is a marvelous sight to see. At night, as the ground cools on the mountains, it sinks into the valleys. Here, the cold air continues to sink, which lowers the air temperature of the surrounding area to be closer to the dewpoint temperature. Thus, saturation is occurring in the valley, which leads to fog to form if there is enough moisture in the area. This is common during the spring and fall months. And it is densest during the sunrise. 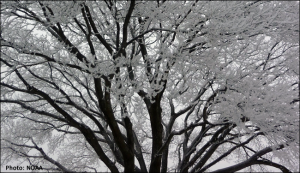 This kind of fog has another kind of hazard: icy conditions. Freezing fog forms forms the same way that radiation fog does, except now the air temperature is below freezing. Even though the air temperature is below freezing, the tiny water droplets can stay as a super cooled liquid until they come in contact with a surface that they can freeze on. Once it freezes on a surface, it forms tiny ice crystals. A few surfaces we generally see these ice crystals on include tree limbs, sidewalks and vehicles. But, what is dangerous is that these tiny super cooled water droplets can freeze on roads and form black ice, which is hard to see. Thus, this type of fog causes dangerous driving conditions and drivers should drive slowly. 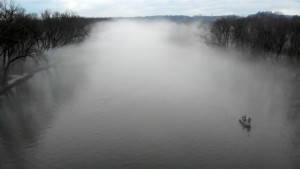 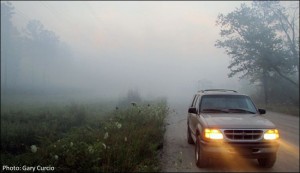 Now, these are only a few types of fog. There are other types like hail fog, which forms after a heavy hail storm, and super fog, which forms when smoke from wildfires and water vapor condense to create this very dense type of fog. Fog can drastically lower visibility, so here are some driving tips when encountering fog. When you encounter fog on your drive, slow down and put some extra distance between you and the car in front of you. Never use your high beams when driving through fog as this will cause light to scatter. You should use your low beams, so that your tail lights are still on, or your fog beams. And if you know there is fog in the area before you leave your home, leave a little earlier to account for extra travel time.

Be safe when encountering fog and you can always tune into 47 ABC for your latest forecast.

National Hurricane Center to issue Tropical Weather Outlooks in May