DELAWARE – FBI Baltimore officials confirmed with 47 ABC that a Laurel, Delaware man turned himself into authorities on Thursday for his alleged role in the Washington, D.C. Capitol riots.

Kevin Seefried, the man reportedly seen in a viral photo marching through the U.S. Capitol with a Confederate flag, was wanted by the FBI for “violence at the United States Capitol.” FBI Baltimore officials confirm that Seefried is a resident of Laurel and his son, Hunter Seefried, also turned himself into the U.S. Marshals Service in Wilmington on Thursday.

According to the FBI affidavit, video footage showed Kevin and Hunter entering the Senate building through a broken window at approximately 2:13 p.m. A short time later, Kevin was photographed holding a Confederate Battle flag inside the Capitol building. Additional video footage allegedly showed Hunter using a phone to take a selfie or video at around 2:29 p.m. 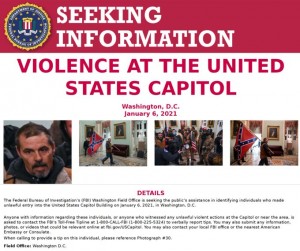 Both were interviewed by FBI agents on Tuesday and confirmed they had participated in the riot. Kevin Seefried told agents that they traveled with their family to see Trump speak, and then he and Hunter participated in the march to the Capitol led by an individual with a bullhorn. Kevin reportedly said that he “brought the Confederate Battle flag from his home in Delaware where it is usually displayed outside,” according to the FBI.

The pair have both been charged with one count of knowingly entering or remaining in any restricted building or grounds without lawful authority, one count of violent entry and disorderly conduct on Capitol grounds, and one count of depredation of government property.

U.S. Attorney David Weiss released a statement regarding the arrest, saying “Last week’s breach of the U.S. Capital Building was nothing less than an assault on our democracy. Those who participated must be held accountable. As I have said previously, this office is committed to working with our partners at the Department of Justice to investigate, apprehend, and where appropriate prosecute Delawareans who committed criminal acts.”