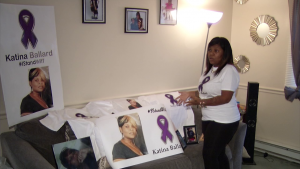 SALISBURY, Md. – It’s been more than three years since 44-year-old Katina Ballard was killed in a hit and run. Now the family is making a public plea for anyone who knows something about that night to step forward. “I don’t want it to be a cold case at the end of the day. Somebody knows something,” said Ballard’s daughter, Tanay Dale.

The hit and run happened on March 17th, 2017. It was a cold, cloudy night and 44-year-old Katina Ballard was walking down Naylor Mill Road. The mother of three and grandmother of seven was hit and killed by a driver who fled the scene. The next day, Dale says she knew something was wrong when her brother called and said there was family emergency. “I instantly – my heart just dropped. I know this is probably her because she was a walker,” said Dale.

More than three years later, Ballard’s case is still unsolved. Police say they haven’t reached any new discoveries in months. “You pull on all the threads you can pull on and the officers and detectives in this investigation pulled on every thread that was available to them at the time,” said Lt. Ryan Koerner with the Salisbury Police Department.

Lt. Koerner says a lack of surveillance footage and witnesses lead investigators to a dead end. He says now the case being solved depends on somebody stepping forward. “If that person were to come forward and just be honest with us and let us know what happened, that’s how we would solve it,” said Lt. Koerner.

Dale says at this point in the investigation, the family’s attention is now on keeping Ballard’s memory alive and letting the public know her case is still cold. They’ve made t-shirts and signs that read #IStandWitT. “I started it. I’m not going to finish. In some cases people’s parents pass away because of cancer and stuff. In this case my mom was killed – ran over. The person didn’t stop,” said Dale.

Dale says she doesn’t understand how someone could hit a person and just drive away. So now she hopes that her family’s efforts in raising awareness will drive out more information about who did this, and why they didn’t stop. “We just need some type of closure. The person that did it – I just wish they would come forward,” said Dale.

If you’d like to help spread awareness about Ballard’s case, the family is selling the t-shirts for $10, which covers the manufacturing price. Dale says you can reach out to her on Facebook to order a t-shirt. Meanwhile, Lt. Koerner tells 47ABC that if you have information about Ballard’s case you should contact them at (410) 548-3165. You can also call Crime Solvers at (410) 548-1776.