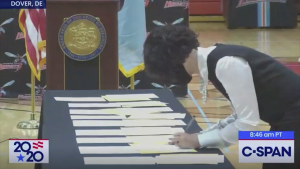 DELMARVA – Monday members of the Electoral College gathered in state capitols across the country to officially cast their votes for the next president of the United States. In Delaware, three members of the Electoral College were tasked with the vote. All three voted for President-Elect Joe Biden. “Fair elections are nothing to be taken for granted, and we have watched as many of you have put the interest of our country above all else,” said Delaware Secretary of State Jeffrey Bullock.

Meanwhile in Maryland, ten Electoral College members put pen to paper and unanimously elected President-Elect Biden. Maryland Governor Larry Hogan said the hallmark of the 2020 election is Americans coming together despite this year’s adversity, and performing their civic duty to vote. “It is a reminder that despite our differences we are united as Americans to to honor the will of the people,” said Governor Hogan.

In Virginia 13 Electoral College votes were cast for President-Elect Joe Biden. The 13 electors gathered at the State House of Delegates for a ceremony that was closed to the public due to the COVID-19 pandemic. Virginia Governor Ralph Northam thanked the electors before they cast their votes.

The votes are now sealed and will be delivered to Vice President Mike Pence.  Vice President Pence will then open them and read them to both houses of Congress on January 6th, 2021.