Parents urge officials to consider returning athletes to the fields

That was message that parents, coaches, and physicians, wanted to send to the MPSSAA and the State of Maryland during the public comment period of Tuesday’s state Board of Education meeting.

“They are receiving their institutional instruction. They are expected to attend classes everyday and their attendance is being taken. They have homework and they are earning their grades,” said Catherine McDonough, the mother of three high school athletes.

Maryland Governor Larry Hogan moved the state to Stage Three reopening on September 4. According to the MPSSAA’s Roadmap for Return to Interscholastic Athletics and Extracurricular Activities when the state is in Stage Three, in-person activities may fully resume, and schools must comply with any State and/or local restrictions in place.

Pressure was then applied to the governor.

“Governor Hogan himself expressed his excitement for Maryland football. We would hope that he means not only the University of Maryland, but Maryland high school athletics as well. It’s gotta be impossible to support one without supporting the other,” McDonough said.

A big concern is the impact that remaining at home is having on the mental health of these athletes. Another is the lost opportunities for scholarships for local juniors and seniors.

“The damage has already been done in some Maryland schools where athletes have already transferred to neighboring states who are currently playing,” said Burt Cashman. “I will very seriously consider withdrawing my kid from Maryland public schools effective immediately, and enrolling them in private school, or moving to Pennsylvania where they are offering interscholastic sports.”

Cashman claims he spoke with the director of PIAA in Pennsylvania.

“The director that I spoke to said we have not had one case, outbreak, or issue reported to us that has been directly linked to sports since we started in August.”

Multiple games in Pennsylvania have been postponed due to coronavirus, as well as a number of games postponed just this week from Utah, Kansas, Kentucky, and Missouri. Although, there is no connection between the outbreaks and sports, directly.

Dr. Josh Funk, a physical therapist, asked the board to consider the heightened risk of injury for athletes who do not have the luxury of working with trainers and coaches in the offseason to playing multiple sports in a shortened time.

Those in favor of a return to play have supporters in Annapolis as well.

Eastern Shore State Senator Mary Beth Carozza authored this letter, saying she supported their cause, and has been in touch with the Governor’s office, state officials, and local superintendents. She also mentions contacting the MPSSAA on the issue of returning to play. 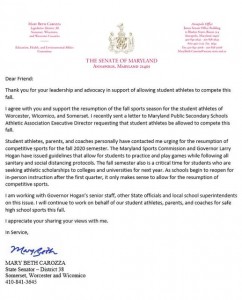 There is a petition with over 7,000 signatures titled Reinstate High School Sports in Maryland this Fall!! in an effort to persuade officials to reconsider their decision to delay fall sports.

We have reached out to the MPSSAA multiple times in the past few weeks, but we have not yet heard a response.

The beginning of winter sports in Maryland is still slated for February 1.

Woodbridge remains undefeated as they take down rival Bulldogs