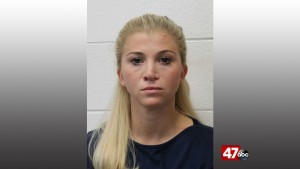 Elizabeth Day, represented by John Phoebus, pleaded guilty to one count of attempted possession of a controlled dangerous substance not marijuana. The second charge, contributing to the conditions of a child, was dropped due to the plea agreement.

Day will serve ten days in county jail and must report by 4 PM on Friday, September 18. She must also pay court fees and is ordered to have no contact with the student or the student’s family. Day faced a maximum of one year behind bars and/or a five-thousand dollar fine.

47 ABC reached out to the City of Salisbury and a spokesperson says they have no comment on the outcome. Day was placed on leave back in December but Wicomico County Schools would not comment Friday about her current employment status because they say this is a personnel matter.

In court Friday, a special prosecutor from the Calvert County State’s attorney told the visiting Worcester County judge Daniel Mumford that Day “abused” her position of authority. The attorney added that the student had a mentor like relationship with Day, something the child’s mother confirmed to the judge.

Day addressed Judge Mumford saying she was stressed while preparing to defend her dissertation for her doctorate and was impatient waiting for a doctor to prescribe her medication.

This case stems from an investigation that started on December 9, 2019. According to those documents, on Dec. 9 the Wicomico County Sherriff’s Office was contacted by the Child Advocacy Center about a report that Day had made several requests to a 16-year-old student, mainly on Snap Chat, to try and get prescribed ADHD medication.

During an interview with the victim, the victim told a detective that Day had made the request in the hallway of the school on either Dec. 4 or Dec. 5. The victim told Day that they did not have any so Day told the victim to ask their friends.

The victim also said that Day had contacted them more than once via texting and/or Snap Chat about getting the ADHD medication and also advised them not to save any of their conversations in reference to the medication.

On Monday, Dec. 9, under the direction of two detectives, the victim contacted Day on Snap Chat about the ADHD medication and established a price of $20 for two pills. Several minutes later Day asked the victim to call her. The victim did and put the call on speakerphone so the detectives could hear and record the conversation. Over the phone, Day agreed to purchase the pills and told the victim to meet her in the locker room at the school the next day to make the sale.

On Tuesday, Dec. 10 a detective arrived at James M. Bennett and seized Day’s cell phone as part of the investigation. A search of Day’s phone revealed that in the weeks and days prior to contacting the student, Day had searched things like “How to convince a doctor to prescribe Vyvanse” and “How to be prescribed Concerta”.

A statement from her attorney said that Day turned herself in on Friday, Dec. 20 where she was charged with two misdemeanor crimes and that after a meeting with a district court commissioner she was released on her own recognizance. The statement also read that the court commissioner came to the decision based upon the minor nature of the crimes and the fact that Day has never been in trouble in her life.