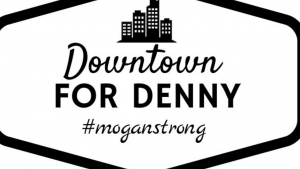 Since his diagnosis, the community has come together in more ways than one to support him, and in the coming weeks those efforts will continue with a series of events called “Downtown For Denny.”

“What we came up with was let’s pick a whole day to do an event where we can spread it out and then will do it on Sundays and they’re going to be three weeks apart, roughly three to four weeks a part from each other,” Jayme Clarke, event organizer and family friend, said.

Clarke and Market Street owner, Rob Mulford are the ones who came up with this idea.

Here’s how it works, in the coming weeks four different bars will hold their own individual events to help raise money in order to pay for Mogan’s medical expenses, as well as his two young boys higher education.

“My goal is that we make them just feel the love going through something like ALS is such a struggle,” Clarke said.

Both Clarke and Mulford said this event will be just another way to show support for Mogan, so they’re encouraging everyone to come out.

“Just the community’s been great as always for many things over the years and this is just another community coming together,” Mulford said.

We are told Market Street, Brew River, Roadie Joes, and Mojos will all be hosting events.

Market Street will kick off the series starting August 30th from 11 a.m. to 4 p.m., with 50% sales going towards the fundraiser, they will also hold an auction where people can buy art and jewelry.

Clarke also tells us that they will have a separate fundraising event in Ocean city at Burley Oak on September 13.