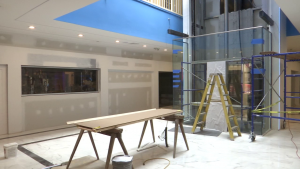 SALISBURY, Md. – Construction on City Center in downtown Salisbury is close to the finish line and developers say the building is almost fully leased to tenants.

Davis Strategic tells 47 ABC they’re about 60 to 90 days away from completing the remodel of the 37-thousand square foot mixed used building. The first and second floor are already filled with new tenants including office space and a salon. Lurking Class Skate Shop plans to move from their current space on the plaza into a space on the first floor where their store will feature a half pipe skate ramp. Davis Strategic says the building was developed in the 60’s and 70’s so this upgrade was needed in order to attract business downtown.

“We’re just going to give it a new fresh revamp and we’re just coupling it with what the city has already done. They are doing all the hard work out front, they are running the infrastructure. We are providing fiber internet to this building. We’re just taking what they have already put hard work in upgrading,” says Bret Davis with Davis Strategic.

Another business that has leased space inside the City Center is MadTech, a company originally based in Calvert County that uses drones and other technology to help farmers. Davis Strategic will be looking to fill the third floor with tenants in the near future. They will also be adding additional parking on Church Street and a live wall with plants on the outside of the building.

Click here to see our previous coverage on City Center.