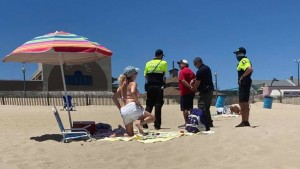 REHOBOTH BEACH, Del. – Officials say a Pennsylvania man was issued a citation after he refused to cooperate with police and wear a face covering on the boardwalk on Monday, as required by state regulations.

According to police, a 56-year old man was walking up to the Rehoboth Beach boardwalk without a face mask around 12:30 pm when a seasonal cadet told him he needed to put on a mask. The Lancaster, Pennsylvania man reportedly replied saying the cadet would have to “follow him and make him.”

The cadet apparently tried to stop the man but he walked away and onto the beach. Police say the cadet stayed on the boardwalk to address other people who were upset and yelling at the man for not wearing a mask.

A full-time officer went onto the beach with the cadet where they found the 56-year old man. They tried to get his identification but the man said he did not have an ID with him. They reportedly asked the man for his name but he gave them a false name and state of residency. The man allegedly refused to give them any more information and was taken into custody after numerous warnings.

Officials say the man agreed to give his information to police after more than an hour of them making requests. The Pennsylvania man was issued a civil citation, provided a mask and released.

In the 17th modification of his COVID-19 State of Emergency Declaration, Governor John Carney reopened Delaware beaches and boardwalks on May 22nd, with the regulation that face coverings are required on boardwalks.

Rehoboth Beach Police say the incident has been widely circulated on social media, resulting in multiple inquires to officials about the situation.