The climate data is in and May 2020 ended up cooler and drier than normal. That makes it the second month in a row where conditions ended cooler and drier. The first few months of the year (January – March) were much warmer than average. When it comes to precipitation, February is the only month so far this year with above average conditions.

Looking ahead to June, the Climate Prediction Center is forecasting above average temperatures through at least the first half of the month for nearly the entire eastern half of the U.S. Stay tuned. 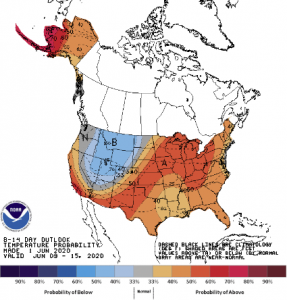