Zoom meeting discussion for Wicomico County to be a 2A Sanctuary 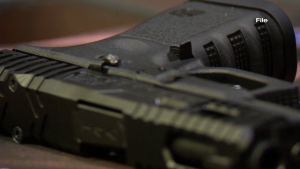 WICOMICO CO.- Wicomico County leaders participated in a zoom panel to discuss why they want to make Wicomico a Second Amendment Sanctuary.

Sheriff Mike Lewis, Council members Joseph Holloway, and Nicole Acle are just some of the few who joined the public meeting.

In the call, they addressed why they want to make Wicomico a 2A Sanctuary.

Sheriff Lewis said he feels many of the gun laws being passed are unconstitutional and he said he believes that many of these laws are meant to curb the crime happening across the bridge, not here on the Eastern Shore.

That’s why he believes those laws shouldn’t have to be implemented here.

” It should not reflect on the great leadership and the great people we have that live on the Eastern Shore, and if you pass laws that further encroach or infringe we will not comply,” Sheriff Mike Lewis, with the Wicomico County Sheriff’s Department, said.

They’re also considering having a public hearing on June 2nd.