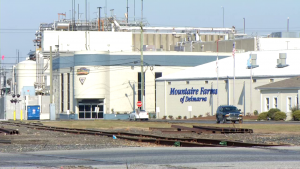 SELBYVILLE, Del. – A Mountaire employee has filed a lawsuit against United Food and Commercial Workers Local 27 Union. Oscar Cruz Sosa, represented by the National Right to Work Legal Defense Foundation, claims the union is forcing him and his coworkers to pay fees under a clause in the contract.

“The union security clause forces him immediately join as a member and pay union dues or be fired is illegal and has been illegal since the 1960s under well established precedent,” says Mark Mix, the President of the National Right to Work Legal Defense Foundation.

The National Labor Relations Board in Baltimore apparently ruled Sosa and his coworkers could hold a workplace vote in order to decide whether the union would be removed. But the union responded by asking that the election either be postponed or that the results not be official until the national board decides whether the union was collecting dues illegally.

“The union filed a suit appealing that decision. So now it’s back here in Washington D.C. but the real strategy there is to delay this decertification vote basically so they can continue collecting these dues from Mr. Sosa and roughly about 800 other workers in that workplace,” says Mix.

The lawsuit seeks a refund of the required union dues for all the employees which is something that could cost more than half a million dollars. Mix says unions often overstep boundaries in states that are not classified as “right to work” such as Delaware.

In a statement to 47 ABC Mountaire Farms says, “Mountaire was recently made aware of this filing through the Department of Labor website. Regarding the allegations, Mountaire has always and will continue to value all employees right to a respectful workplace, free from harassment. In reference to unlawful forced dues, we will defer to the National Labor Relations board to adjudicate the allegation…Mountaire values an employee’s right to choose and looks forward to allowing its employees the freedom to choose whether they wish to be represented by UFCW local 27 or not.”

Mix says they’re not certain how long it will take for a decision to be reached on the union’s appeal. 47 ABC also reached out to the United Food and Commercial Workers International Union but we have not yet heard back.