Salisbury pushes for control of liquor permits in the city 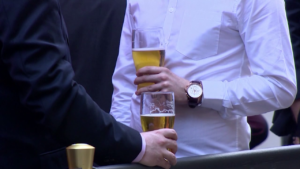 SALISBURY, Md. – Some Salisbury officials are pushing for state legislation that would allow the city to have control over liquor licenses and permits.

Delegate Carl Anderton is sponsoring House Bill 1319. Salisbury’s Mayor says he’s been advocating for this for the last four years but the city got serious about it this year, after controversy over permitting for last year’s National Folk Festival. Right now, Wicomico County is responsible for liquor licensing and permitting in the city. We’re told this would be the same kind of situation that Annapolis has, where the process is not in the hands of the county but rather the city.

Mayor Jake Day believes this would help reduce fees as well as eliminate red tape for both businesses and events. “We see it as a good thing. We want to be business friendly. This should be an easy change, a no brainer. The business community stands behind it, the Greater Salisbury Committee and the Chamber of Commerce have announced that they are fully behind it and we obviously want our legislators to stand behind it as well.”

We’re told the city has consolidated permitting for several other areas over the last couple of years, something Day says has allowed business to grow. There will be a hearing on House Bill 1319 on Monday in Annapolis.

The Latest: Flags fly for pandemic victims in Spanish park