SALISBURY, Md. – The fallout continues following the unearthed letter sent from Wicomico County Executive Bob Culver to Maryland Senate President Mike Miller regarding the legality of Beer and Wine licensing for the 2019 National Folk Festival. Questions remain regarding the intent of the letter, and what went on behind the scenes as organizers worked to receive approval for the licenses.

Media outlets, the City of Salisbury and others were made aware of the infamous letter sent by Culver to Senator Miller on Friday when a rebuttal letter was received from the office of Comptroller Peter Franchot.

The article was scathing, saying that the application for these critical licenses was delayed “indefinitely” by the county Board of License Commissioners. The author of the letter, Chief of Staff Len Foxwell, went on to say in 25 years working in state government, he had never seen a chief executive of a local government act so unprofessionally.

When asked about the actions of Culver’s letter to Miller, Salisbury Mayor Jake Day said he has “never seen anyone believe that they are acting in the best interest of public health and safety and do it in the dark.”

Culver stood and answered questions at an early afternoon press conference at the Government Building in downtown Salisbury for about 40 minutes defending himself, saying that he had no intent to sabotage the Folk Festival.

One of the first questions asked was why the letter was sent to only one state official, and what the intent was behind such a letter.

Culver reasoned that he had to go above Comptroller Franchot to get an answer as to why these licenses were permitted, saying board members saw it in violation of Article 2B.

The comptroller’s office disputes this claim, saying this was legal under Maryland code 1-304, under alcohol beverages. They not only say this is legal, but that it’s not uncommon for applicants to apply for this.

They add that officials from the Field Enforcement Division were out in Salisbury to check designated boundaries, the presence of appropriate signage, as well as make sure that everyone who poured alcohol was trained properly.

Before the press conference commenced, everyone in attendance received a packet with documents detailing communications between Wicomico County’s Executive Office and its Board of License Commissioners to individuals in the comptroller’s office. Two letters outlining concerns for the 2018 Folk Festival were sent out during the summer. It is unclear when Salisbury was awarded beer and wine licenses for the 2018 Folk Festival. One on July 26, from the Board of License Commissioners to the comptroller’s director of field enforcement, the other on August 9, from Culver to Franchot.

However, there were no letters, no emails sent out by the County Executive’s office until the day after non-profit beer and wine permits were issued to Salisbury. And that letter went to Miller.

When we asked Culver, he and members of the board said this is not their festival. That they should not be the ones reaching out for answers.

However, 47ABC received a copy of a letter from December 9, 2016, sent by Wicomico County Parks and Tourism to the National Council for the Traditional Arts in support of Salisbury’s application for the National Folk Festival. The letter was sent along with ones from the city, the chamber and state. 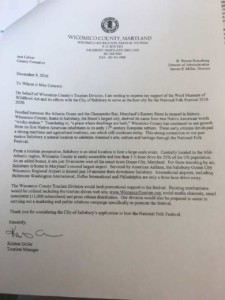 In addition to this, Wayne Strausburg sat on the executive committee for two years, attending 75-percent of Folk Festival meetings as Culver’s representative, according to a National Folk Festival source. According to another source, “they were part of it from day 1.”

Culver went on the offensive regarding one aspect of the rebuttal from Foxwell. Page 3 of the rebuttal letter states “it was quite clear to Mayor Day and his Administration that the City’s application, for its technical sufficiency, was being delayed indefinitely by your Board for reasons having nothing to do with merit and everything to do with your own personal resentments.”

Culver says there was no application made to the board or Wicomico County.

More questions remain, like why would the county take this stance on licenses for the Folk Festival, but not on other events.

“I have to wonder why, when we get state permits, state beer and wine permits festival permits, for fun Friday’s at the zoo every month, why is there no objection to that,” said Mayor Day.

In our conversation with Foxwell Monday afternoon, he did not hold back in expressing that this was an effort of sabotage.

“You had the Wicomico County Executive, who stood to benefit as much as anybody from the National Folk Festival actually arguing against it, with the obvious intent of disrupting the event, perhaps fatally.”

Culver fired back, saying this was purely an effort to have a conversation and make sure everything was done legally. Adding that the letter sent out by Foxwell wouldn’t fly if he was an employee in his office.

“He’s full of it,” Culver exclaimed.

Campaign: Pennsylvania Lt. Gov. John Fetterman, Democrat running for Senate, had stroke but is on way to 'full recovery'