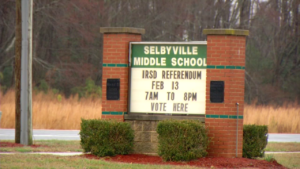 SUSSEX CO., Del. – It appears the third time was the charm for the Indian River School District after residents voted to pass the district’s referendum on Thursday.

Results came in around 8:30 p.m. with about 12-thousand ballots cast. Almost 75-hundred residents voted in favor of the tax increase, which will fund the construction of a new high school. Superintendent Mark Steele believes this time was different because of all the information that was given voters in order for them to make a decision.

“They did their homework. They watched the videos. They calculated their tax rate. They did what they should do as taxpayers. And I think knowing that that was done made a big difference. It’s just an unbelievable relief,” says Superintendent Mark Steele.

This vote means that the average district property owner may experience a maximum tax increase of $63.25. That will be phased in over a three year period. Steel says the high school construction project should be a four year plan.

School officials say the overcrowding problem is especially severe at Sussex Central High School where more than 1,800 students are currently housed in a building that’s designed for 1,500. The new school proposed by the district would hold 2,200 students. The referendum also calls for a series of capital improvement projects that would further help to relieve overcrowding.

Click here to see our previous coverage on this referendum.