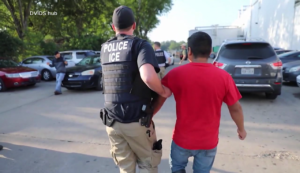 ANNAPOLIS, Md. – Maryland lawmakers are considering a bill that would prohibit law enforcement agencies in the state from working with federal immigration authorities. Also known as House Bill 388, this piece of legislation would prohibit local law enforcement from asking about a person’s immigration or citizenship status or place of birth during a stop, search, or an arrest. The bill would also ban law enforcement from transferring a person over to ICE unless they’re required to by federal law. But some local lawmakers tell 47 ABC, this piece of legislation would be a threat to residents’ safety in the state. They add that it could possibly lead to known criminals being released back onto the streets.

Officials say right now only three counties in the state have agreements to work with federal immigration and ICE including Cecil, Frederick, and Hartford Counties