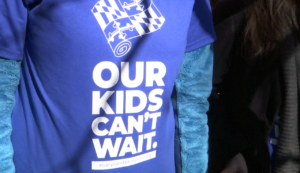 ANNAPOLIS, Md. – It’s a fight to the finish. Hundreds of educators, students, parents and more made their way to Annapolis to support one the most talked-about bills this session, the Blueprint for Maryland’s Future Act. Legislation that they say will have a major impact on Maryland’s education system.

“Our kids really can’t wait any longer to have the best that they can in their schools,” said Maryland State Education Association (MSEA) President, Cheryl Bost.

All eyes were on the Maryland General Assembly as supporters of the Blueprint for Maryland’s Future Act attended the bill’s one and only hearing on Monday
Hoping their testimonies would convince lawmakers to pass the legislation that would invest nearly $4 billion into the state’s public education system.

But some lawmakers say while the bill looks good on paper it raises some major concerns.

“It doesn’t allow the counties to spend the money as they see fit it’s more or less the state dictating them how this money is going to be spent and not all counties are the same,” said Delegate Wayne Hartman (R-District 38C).

Other concerns include just how exactly the state is expected to pay for such a high tab.

“They’re looking at tax increases, increasing that tax and corporate tax, there’s only so much Maryland people can take. Will be left with very few people here to pay the taxes if we push too far,” said Hartman.

But some lawmakers say the price tag is doable.

“As of right now the numbers we are seeing over a 10-year projection we can absorb. The increases and the numbers that we see, look more than justifiable,” said Delegate Carl Anderton (R-District 38B).

Lawmakers add that this bill is going to come down to the wire when it comes to the General Assembly making a final decision. A decision that they want to be completely sure about before casting their vote.