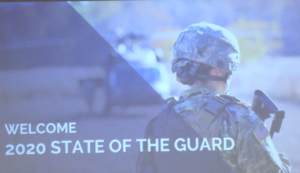 NEW CASTLE, Del. – On Friday, the Delaware National Guard revealed the strategic vision they plan on following over the next couple of years to secure a brighter future for themselves. Early Friday morning officials with the Delaware Army and Air Guard briefed dozens of attendees at the annual state of the guard event on upcoming plans and future construction projects the National Guard has in store. Officials say future plans include improving their recruiting and retention efforts, expanding their statewide solar power capacities, and building new and improved fitness and training facilities. They say making improvements to their infrastructure is critical in order to provide the best learning environment for their trainees.

“Our infrastructure is aging as it is across the country. Either we don’t have the right amount of buildings, you take the large state that just doesn’t have the buildings that they need to house their people and equipment, or it’s the wrong size,” said Director of Facilities for the Delaware Army National Guard Fred Cost.

Cost says one of those improvements will actually be taking place at one of the National Guard’s base in Bethany Beach. He says they’ll begin construction on a new physical fitness center sometime this year. He adds that the new 7,000 sq ft, $3.4 million project will provide a state of the art facility to help soldiers meet their physical fitness requirements.

“We do quite a few projects to just keep our aging infrastructure healthy enough. This will be able to give them that place to work out as well as when we are assessing new soldiers,” said Cost.