Celebrating one year as chief 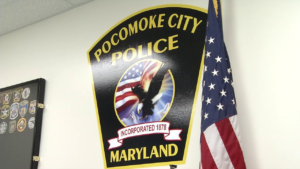 It also gave people a chance to meet the chief and ask him questions.

Looking back on year one Brumley said he has made great progress and implemented new policies.

“The officers have retrieved several handguns from traffic stops and I’ve seen a decrease in that kind of problem here, ” Brumley said.

One of the big things that he has implemented is communication between the public and the officers.

“We have started doing a lot more foot patrols and bike patrols in the neighborhoods, so the officers will get too know the residents,” Brumley said.

Those efforts to get to know the residents is something that people admire about the new chief.

“Communication with people that are actually living and actually out here can see what’s going on, you know like that’s beautiful because they an actually help them help the police do their job a little bit better, Darrius West, a Pocomoke resident, said.

Looking forward Brumley said he hopes to continue to improve communication and hopefully put a fleet program in place.

“It would benefit the city financially because it would save money going with this fleet program,” Brumley said.

The chief said that overall  he has gotten positive feedback about his work so far in the community and he hopes he can continue implementing new policies and having his officers attend more trainings.