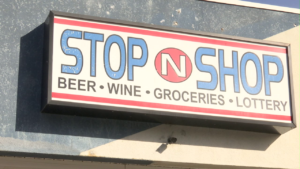 Police said that they are looking for more than one suspect right now.

Store employees told 47ABC that three men came into the store at around 6:30 p.m. and demanded money.

47ABC was told one of the robbers ended up hitting a store clerk in the face multiple times during the robbery.

Sadly, police said the suspects were able to get away.

Some people in the community told 47ABC that they were surprised by this incident, and it hits close to home as they always come into the store and know the people that work there.

“I’m honestly surprised because this is a quiet neighborhood this is the type of neighborhood where you can leave your doors unlocked, and I grew up in this neighborhood, and I knew the people that got robbed, so it’s just like wow anybody’s next in this town and it’s kind of scary,” Jeremiah Murray, a Delmar resident, said.

One of the residents said he heard helicopters flying around the area for thirty minutes last night. Police confirmed that helicopter was out looking for the suspects.

Police said there is no new information to give as they are still investigating.