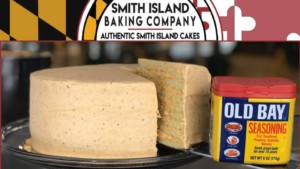 CRISFIELD, Md. – A Somerset County business is getting a lot of attention after announcing a new creation on Friday: an Old Bay Smith Island Cake.

Brian Murphy, the owner of the Smith Island Baking Company, Inc. in Crisfield, says the dessert consists of their “from scratch vanilla cake” with Old Bay buttercream frosting. Murphy tells 47 ABC he’s not exactly sure who came up with the idea but they discussed it on Friday and perfected it in just one day.

Murphy says the idea started to take off after they posted a photo on their company’s Facebook page. One person commented, “Well, Old Bay is good on vanilla ice cream.” Another person said, “Oh I am so ready for this.”

Murphy says he handed a few people a slice without telling them the flavor. At first, they were skeptical and described the flavor as “hard to place.” But once they were told, they were pleasantly surprised.

Smith Island Baking Company says they plan to roll out the Old Bay Smith Island Cake in both small and large sizes as well as cake bites on February 5th. They’re not sure if it will be offered for a limited time because they want to see how well their customers like it.