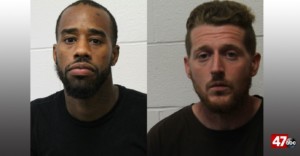 Police say on November 13th, 2019 32-year-old Calvin Bratten of Pittsville and 29-year-old Daronte Jones of Salisbury, were pulled over for an equipment violation on the 100 block of Truitt Street in Salisbury.

During the stop, police say they learned Bratten, the driver, license was suspended and the registration plates on his car belonged to another car.

Police say passenger, Jones, then handed the deputy some marijuana while getting out of the car.

A search of the car ensued after and a deputy found some heroin and four used needles.

Both, Bratten and Jones were taken into custody and sent to the Central Booking Unit for processing.

The 32-year-old and the 29-year-old have been charged with possession of heroin.

Both men were released on personal recognizance.