47 ABC’s Erica Murphy was joined on the desk by Coastal Hospice’s Alane Capen Monday morning to learn more about the seasonal event.

Capen, president of Coastal Hospice & Palliative Care, says that in 2018, the program raised more than $128,000 to fund hospice charity care for those in need right here in Wicomico, Worcester, Somerset and Dorchester Counties, making it a record breaking year.

The non-profit organization was then able to provide charity care for more than 1,300 hospice patients who had no resources for care or who had needs that were not fully covered by their insurance.

By making a donation, you also pay tribute to a loved one. Their name will be written on an angel ornament and hung on trees displayed at libraries in Crisfield, Princess Anne, Salisbury, Ocean Pines, Snow Hill, Pocomoke City, Cambridge, the Hurlock Train Station and even our set at WMDT.

During the month of December, 47 ABC will put a few new angels on the tree every morning on Good Morning Delmarva. 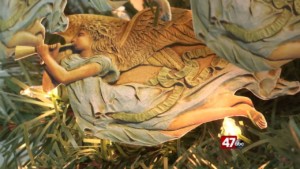