Student Flown to Hospital After Fight at Salisbury Middle 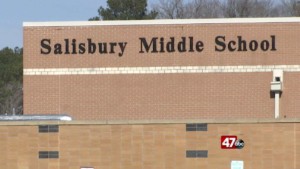 SALISBURY, Md. – A Salisbury Middle School student was flown to a hospital after a fight at the school on Thursday left him with a head injury.

Lt. Tim Robinson with the Wicomico County Sheriff’s Office tells 47 ABC two male students got into a fight on Thursday. It’s unclear who broke the two up, but the victim was taken to PRMC. Shortly after, the victim was then flown to another hospital in Baltimore. He is expected to recover.

Robinson says the other student involved in the fight will face charges.

This is not the first incident of violence at the school in recent days. On Friday, several parents picked their children up early from the school after numerous fights broke out.

Wicomico County Public School Superintendent Dr. Donna Hanlin said on Friday the school was operating on a modified safe in place procedure. The procedure is not a lock down, but a structured and supervised transition between classes aimed at increasing safety.