Organizers hosting “Battle at the Park” at newly painted court 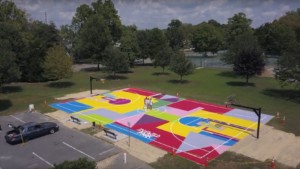 EASTON, Md. – A community basketball game is being held Sunday night in Easton to celebrate some of the courts that were recently revamped.

Organizers are hosting “Battle at the Park” at 6 p.m. at Idlewild Park. The courts were recently painted bright neon colors as part of a campaign called “Play in Color”. Shelton Hawkins, a local from the Eastern Shore, says he was inspired to paint the courts after he saw they weren’t being used very much. He says he hopes Sunday’s Battle at the Park brings the community together.

There will be food, music and a chance to win prizes.