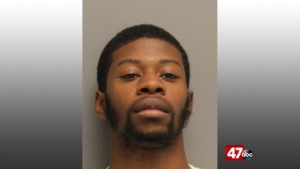 Update 7/12: The Dover Police Department says they have arrested the suspect in the alleged armed robbery in Harrington, Delaware on Saturday night.

Wednesday, Deandre T. Bennett of Dover , was arrested for robbery and related charges. Using evidence obtained at the scene, surveillance video and assistance from the Dover Police Department, Bennett was identified as the suspect.

Harrington Police then obtained a warrant for his arrest.  The 23-year-old also had an active warrant out of the Dover Police Department for robbery.  Bennett is being charged by Harrington Police with robbery of the first degree, possession of a firearm during the act a felony, theft under $1,500, and child endangerment.  He is being held at SCI with a cash bond of $40,000.

HARRINGTON, Del. – Police are investigating an alleged armed robbery that took place at a Rite Aid on Saturday night.

Police say the robbery happened 7:42 p.m. on South DuPont Highway when an unknown black male tried to buy something, but pulled a gun out while the cashier was ringing up the items. The male then took an undisclosed amount of money out of the register, police said.

The suspect is described as a black male wearing blue shirt with white stripes, black pants with white stripes and dark color shoes.  Anyone with information is asked to contact the Harrington Police Department at (302) 398-4493 Ext. 21 or Crime Stoppers at 1-800-TIP-3333.