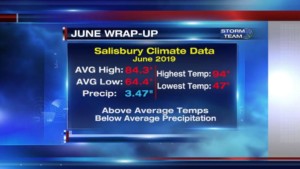 Believe it or not, the first month of summer is already over! So how did it stack up compared to other years?

Overall, temperatures were above average for the month of June. The average temperature was 74.4°, which is 2.4° above normal. The coolest low temperature recorded last month was 47° on June 4th. The month ended with our first official heat wave of the season, with 5 straight days of highs in the 90s. The highest temperature recorded was 94° on both the 27th and 29th.

In terms of precipitation, Salisbury received 3.47” of rain, which is slightly below average for the month. The most rain received in a day was 1.03” on June 2nd.

July will be starting out on a hot note with another heat wave in the forecast. Stay cool!