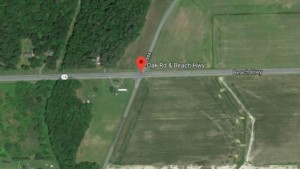 Officials say the accident happened at 12:12 a.m. near the intersection of Oak Road and Beach Highway. According to police, 28-year-old Brandon Legrand was driving a Harley-Davidson motorcycle southbound on Oak Road. He reportedly failed to turn along a curve and drove off the west side of the road, south of Beach Highway.

Legrand, who was wearing a helmet, was pronounced dead on the scene.