If you thought the warmth in April was a one month deal, guess again, because that heat build up a bit more in May. May 2019 was officially the 6th warmest May on record. Luckily this month, the severe weather was toned down from April. 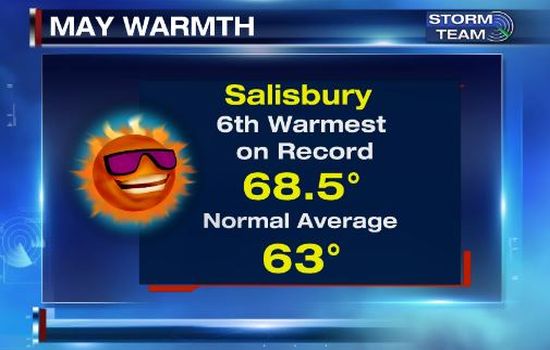 Summer began to plant its flag on Salisbury during the month of May, as lows above 60° occurred 16 times, along with 16 high temperatures above 80°. Not surprising, 14 of the 16 days in which the highs were above 80°, so were the lows above 60°. 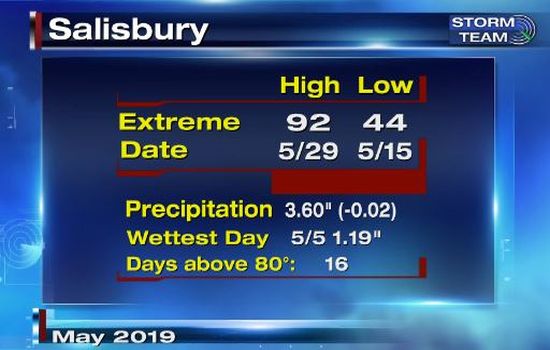 On the other hand, the coolest low temperature of the month took place on May 15th at 44°. Lows in the 40s were few and far between only taking place 4 times. Highs below 70° were also meager happening 4 times and all 4 during the 1st half of the month. The coolest high for the month was 58° on the 13th.

The amount of rainfall during the month of May was near average at 3.60″. The wettest day of the month was on the 5th at 1.19″ and also the only day in the entire month to receive rainfall above 1 inch. The amount of days with measurable rainfall was 14, which was slightly above average of its 11 days.

The month of June has started above average for both temperatures and rainfall. However, the Climate Prediction Center predicts that same trend to continue as we head into the 2nd half of the month. Stay tuned to our 47ABC Storm Team to find out how the rest of this month will shape up and if another record warm month is achieved.