Hurricane Season is Here! What Should You Expect?

The Atlantic Hurricane season has officially started. It started on June 1st, and will continue through November 30th.

The National Hurricane Center officially released their hurricane outlook in late May, and below are the details. 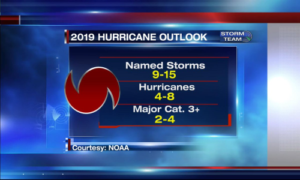 According to NOAA, there’s a 40% chance that this hurricane season will likely be around average. 9-15 named storms are expected, with 4-8 of those becoming hurricanes, and 2-4 of those becoming major category 3+ hurricanes. This outlook only forecasts the amount of storms that will develop, plus their strength, not the amount that will actually hit the United States. So, keep in mind, although it’s expected to be a “normal” season, it only takes landfall of one destructive hurricane to make it a devastating season. There’s also a 30% chance the season could be below average or above average.

Below is the list of names that will be used during the 2019 hurricane season. If we get through the entire alphabet, then the greek alphabet will be used. Andrea has already been used due to a weak storm back in May, so Barry is the next name in the lineup. 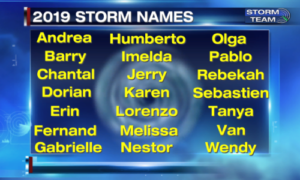 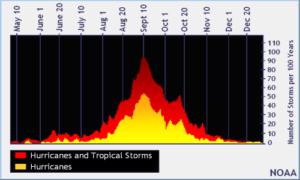 Now is the time to review your emergency plans so that you’re prepared for the upcoming season. If you don’t have a plan, now is the time to get one, especially if you live near the water and in a flood prone-hurricane susceptible area. You can also download the FEMA app for more information and updates throughout the season.

NOAA will update its hurricane outlook in August as we approach the peak of the season. Stay tuned.