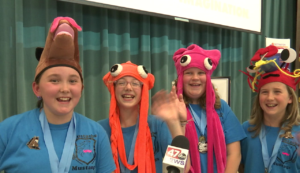 SALISBURY, Md. – The community is celebrating two teams from North Salisbury Elementary who just came back from the 2019 Destination Imagination Global Finals. One of those teams made up of four 5th grade students called the Mustache Mustangs, won first place at the finals, beating more than 70 other teams who competed across the United States and 17 different countries. Through the Destination Imagination program, students work in teams to research, design and build a solution to their preferred challenge. Challenges include the fine arts, science, service learning, and more. Officials say the Mustache Mustangs  became the first ever Wicomico County team to place first in the global finals.

“It was months of hardwork and we lost practically all of our Sundays working towards this and it feels good like its finally paid off,” said Bella Thompsen.

“It’s rewarding for all of us to see a team that has persisted, that has pushed themselves, to an accomplishment that’s this great,” said Wicomico County Destination Imagination Coordinator and Regional Director for Maryland Eastern Region, Susan Bounds.

47 ABC also wants to give a shout out to the other other team from North Salisbury who competed, the Peculiar Pandas, who placed 13th out of 80 teams that competed in their level.